From AIOWiki
Jump to navigation Jump to search
June Foray 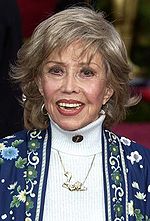 June Foray was born September 18, 1917 and passed away on July 26, 2017. She was a prolific voice actress with more than 300 credits in various mediums. June was perhaps best known to the public as Grandmother Fa in Disney's Mulan and as Rocky (and assorted other voices) in The Adventures of Rocky and Bullwinkle and Friends.

Click one of the above tabs to see what June Foray has done on Adventures in Odyssey.
June Foray has acted in 1 episode with an average rating of 96%