Album 59 and more
November 11, 2014
It's been quiet on the news front of AIO lately, but there's been a storm of activity today with 3 new products coming out.

First up is Album 59, the title will be Taking the Plunge, we can assume that this will pick up right from where 58 left off. The hard copy is currently due for release in August 2015, with digital and radio releases probably coming shortly before that. Something new with 59 though is that it will only contain 2 CD's instead of the usual 4, meaning that this album will most likely only have 6 episodes instead of 12. It remains to be seen if Album 60 will follow this format in 2016 or if it will be pushed up to make up for the shortened 59 season.

Next up is the first new sampler album in a while, it's based on The Dropbox episode from the OAC and also includes The Chosen One, Part 1 and Part 2. That's interesting because The Chosen One has already been in a sampler album. The sampler is due for release in March and currently does not have a cover image.

Lastly is a new book based on the Jones and Parker detective agency.

October 04, 2014
The September Poll has ended! Twenty-six percent of the 81 fans who voted choose #515: “B-TV: Behind the Scenes” as their favorite B-TV episode.

This month's poll question is:

Which 'Bernard and...' episode is your favorite?

In anticipation of a new B-TV episode next year, #769: “B-TV: Truth”, our September poll asks the following: Besides the live show, #???: “B-TV: Live”, what is your favorite B-TV episode? Click here to vote now!

Official Podcast 206
August 20, 2014
Executive producer Dave Arnold and writer/director Paul McCusker answer questions about album 58: The Ties That Bind, and give a few hints about upcoming episodes (including a new B-TV), and share a goof that fans noticed. 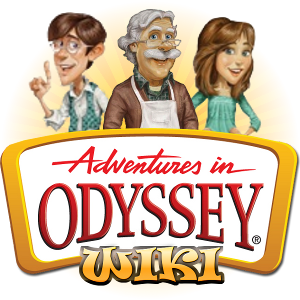 New Features Galore!
August 14, 2014
This summer we have been hard at work developing several new features on AIOWiki! Read below to learn about our latest additions,

Let us know in the comments what you think of these new additions. And, as always, let us know if you have any new ideas! We hope our newest features continue to make AIOWiki an indispensable resource for Odyssey fans everywhere!

August 04, 2014
It has been over a year since the last poll on AIOWiki and with a new season of Adventures in Odyssey approaching this fall, we have decided to ask the question, "what what was your favorite episode in Album #57: A Call to Something More?" To answer visit the poll page.

Also, new information has been released regarding the 2015 Season and Odyssey Adventure Club: Season 2. Visit those pages for more details!

Character Statistics
July 01, 2014
Have you ever wondered which characters have made the most appearances on Odyssey? See if you can guess which other characters are in the top ten! Here's a hint: Whit, Connie and Eugene appear in the most episodes. Comment below with your guesses and then check out our new list of the top 50 to see where they rank.

Album 58 Titles
June 20, 2014
Album 58 is coming up fast and we finally have the list of episode titles for the album. Similar to Album 53, this album will have episodes titled The Ties that Bind, Part 1 - 14. This will also be the first album to feature more than 12 full length episodes since the Gold Audio series.

April Roundup
April 20, 2014
We're back, after some unfortunate downtime we're pleased to say that the wiki is back and is once again fully functional. We're also pleased to say that our popular Android app is up again too, even has a few new features to go with it.
Over the course of the past month there's been two new podcasts released, Official Podcast 196 (behind the scenes of the new comic) and Official Podcast 197 (The Bible Network deleted scene), be sure to check them out if you haven't yet.
Also released this month was the new Odyssey Adventure Club exclusive episode Drake the Cosmic Copper, FOTF has also released the long awaited Officer Harley episodes to the OAC. Some of these episodes are available for the first time in over 20 years, we're sure that these will be new for many fans out there. Be sure to check back to the club next week when Mission: Unaccomplished, Part 1 is released, it's one of the last episodes to feature Zach Callison as the voice of Matthew Parker.
There's also been some sad news in the last month, first we've learned that the winning script in the college scholarship writing contest A Jay in the Life will not be produced. While the AIO team enjoyed the originality of the script, it took several characters in directions that conflicted with storylines they had already established. Secondly it's been announced that Brock Eastman will be leaving his job with AIO and taking a new job at Compassion International.
Keep checking back for more news in the days ahead, with the release Album 58: The Ties That Bind getting closer we're sure that details will be popping up soon. On the topic of Album 58, the summary has been released,

March 17, 2014
It's still a long way off but we have out first look at Album 58: The Ties That Bind. We also have our first look at the next two books in the The Imagination Station book series and a new book for girls called Candid Conversations with Connie. All four of these new products are due for release later this year.
In other news there's currently a promotion on for the Odyssey Adventure Club, when you sign up enter the promo code OAC and the first month will only be $5. 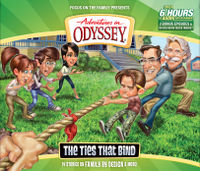 Hear Dave Madden’s 12 Axioms for Success in Show Business (If That’s Really What You Want) as read by Phil Lollar:

Dave Madden
January 16, 2014
Today we are sad to report that Dave Madden passed away this morning from congestive heart and kidney failure at the age of 82. Dave was the voice of Bernard Walton and appeared on 94 episodes over 20 years. We will miss him dearly and our prayers are with his family.