B-TV: To Tell the Truth

From AIOWiki
(Redirected from B-TV: Truth)
Jump to navigation Jump to search
#769: “B-TV: To Tell the Truth” 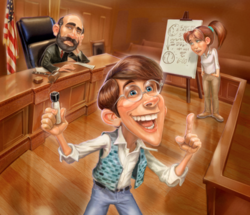 You need to enable JavaScript to vote.
The Cure, Part 3
B-TV: To Tell the Truth
To the Ends of the Earth

What's the truth about "truth"? Our investigation takes us from the Odyssey courthouse, to ancient Jerusalem . . . and beyond.