From AIOWiki
Jump to navigation Jump to search
#843: “Always Do Your Best-ish” 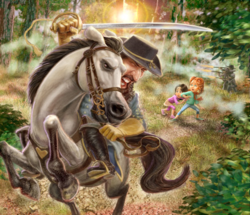 You need to enable JavaScript to vote.
Mean Streak
Always Do Your Best-ish
Charlotte

Olivia and Renee run into unexpected obstacles while working on a school play and a new Imagination Station program.

This episode begins with Olivia walking over to Zoe, who’s trying to print the cast list for a play Olivia has written and auditioned for. The play was inspired by Doctor Graham’s family story of Irena Sendler and World War II. While Zoe struggles to print out the list, Olivia begins squealing in excitement over getting to see the cast list, and who was cast, adding, “Not that it’ll be much of a surprise!” revealing her assumption that she’ll be cast as the lead, Irena. Seeing her confidence, Zoe hesitantly tells her that, as the director, she decided not to cast Olivia as Irena. The scene ends with Olivia in shock, asking who she’ll be playing instead. A school bell transitions the scene over to the next one.

Seeing the official, posted cast list, Olivia is stunned to find that she will be playing Irena’s mother. She begins talking to Zoe about it but is interrupted by Valerie, who pushes her out of the way in order to see who she got in the play. Pleased by what she sees, Valerie simply states, “Oh cool. I got the lead.” “VALERIE?” Olivia inquires, “You cast Valerie as MY Irena Sendler?”

Later, Olivia explains to Zoe that she wanted the part so that she could move the audience, explaining how important the character and story was to her, and asking if she actually thought Valerie could play the role correctly. “Yes,” Zoe responds genuinely, saying that even though Valerie pretends to be nice a lot, and manipulates people, she was still a great actress, who played the role sincerely, and deserved the role, based on her audition and talent. Still upset about her part, Olivia complains that she’ll only be in three scenes. Zoe comforts her by explaining what crucial, and emotional scenes they are, adding that Olivia can play them very well, that the script is amazing, and that she wants the play to be just as amazing. Reluctantly, Olivia agrees to play the role she is given.

The second storyline is then introduced, as Whit and Renee Carter are in the Imagination Station. A few men with country accents speak of battles, revealing the adventure to be an Imagination Station program version of Sperry McGerk, a Civil War story Whit told Renee in #820: “The Legend of Sperry McGerk”. Whit says that Renee’s program isn’t bad, but adds that the townspeople seem about “fanciful.” Renee brushes off the comment saying, “Don’t worry about them. Sperry’s the hero!” The program suddenly glitches, and Sperry is heard climbing into a battle tank. As Sperry shoots at the Confederate army, bomb sirens begin to go off, and Whit stops the program. It is found out that Renee took a shortcut, loading more than one adventure onto the same artificial intelligence matrix. Despite Renee’s complaining that it takes longer to use a new matrix for every adventure, she agrees to fix the problem, since doubling up like she did, creates glitches. Whit then says that the townspeople need to be more realistic and that each should have their own personality and background. And again, Renee agrees to do so.

Back at the show rehearsal, Zoe is directing Valerie, when one of Olivia’s scenes comes up next. The scene progresses smoothly, both Olivia and Valerie performing flawlessly. Zoe compliments Valerie on her performance. Feeling unimportant, Olivia asks how she’s doing and if there’s anything she should change. Zoe responds, saying she’s doing just fine, and her deliverance should stay as is. As Olivia walks off to get Valerie some water at her request, Zoe says that Valerie has some big scenes coming up.

In the next scene, which takes place at Whit's End, Olivia is heard dramatically practicing the deliverance of her lines. This one person rehearsal is heard by Renee, who comes over and the two begin talking about their recent activities. Renee’s been coming up with personalities for digital townspeople, and Olivia’s trying to practice her lines in a way that’ll move the audience. As Renee makes Olivia a sundae, Olivia explains her theatre dilemma, saying that Valerie will get all the glory, and Olivia will be unappreciated. Renee relates, complaining that no one will care about the small characters in her program when Sperry is so important. Olivia says she wishes her part had more lines and scenes, then realizes that since she’s the playwright, she can add to her part. Olivia leaves excitedly, proclaiming, “I’ve got some writing to do!”

Later during rehearsal, Valerie and Olivia are practicing their scene again when Olivia says that she wrote more lines. Zoe and Valerie agree to try it, and they go from the top of the page. Olivia speaks her added lines with great dramatic flair and Shakespearean emotion, causing Valerie to hesitate awkwardly before continuing the scene. Olivia interrupts Valerie’s line to ask Zoe what she thinks. Zoe too is hesitant and decides to “Come back to it.”

Rehearsal continues, and with the scene change, Zoe is heard directing Warren to be angry in his upcoming scene. He enters another scene featuring Olivia and Valerie, and is shocked when Olivia not only begins firing a fake gun in the middle of the scene, but adds a death sequence for her character. Zoe interrupts, slightly angry, asking Olivia what she is doing. “Wouldn’t it be so dramatic if the mom died in this scene!” Zoe argues that it doesn’t line up historically. Valerie adds that Olivia was over-acting and that her idea was dumb. Valerie walks off in a huff, leaving Olivia to offer to play Irena if Valerie can’t. Zoe turns down her offer, asks Valerie to stay, and tells Olivia that they’ll go over her ideas during next rehearsal.

Back in the Imagination Station, Renee is showing Whit the work she’s done on her program, however, when Whit asks about a few soldier characters, he realizes that she has programmed all of them to have the same character and personality. Renee asks why it matters, and Whit expects her to have realized that the user of the program will quickly notice that everyone looks and talks the same. Renee wants to reprogram the machine so she can’t take more shortcuts, but Whit’s answer is a quick no, saying, “I want you to learn the rules before you can break them.” As Whit leaves, Renee promises she knows what she needs to do. However, after Mr. Whittaker is gone, Renee decides to take more shortcuts in her programming.

Back on stage, Valerie is performing a scene where Irena is in jail. Unfortunately, Olivia enters in the middle of Valerie’s line, singing. Olivia thinks that a musical dream sequence would be appropriate at this time of the show. This causes Valerie to threaten to quit, if Zoe doesn’t put a stop to Olivia’s additions. Zoe agrees with Valerie and tells Olivia, “No changes to the script.” Olivia says she wants to make the show better, to which Valerie replies that her ideas are terrible, according to Zoe. Zoe corrects her in saying that Olivia’s ideas aren’t terrible, they simply aren’t right for this play. The girls continue to argue, until Olivia becomes upset, saying that if they won’t use her ideas, they shouldn’t use her. Nearly in tears, she runs off, saying, “I quit!”

Back at Whit’s End, Olivia is complaining to Renee that if God gave her the gift, why wasn’t she able to use it. To cheer her up, Renee invites her to try out a new Imagination Station adventure.

In the Imagination Station, Olivia says that the program is impressive, complimenting her on the soldiers in particular. Renee says that Whit didn’t think she could do it, so she had to show him. However, due to her reprogramming, Renee is unable to end the program, leaving the two girls to fend for themselves. More glitches ensue until the program fades out, thanks to Whit. He then invites Renee to a chat downstairs.

Renee apologizes, saying it was a waste of time to program so many details, and Olivia agrees. “If no one notices your work, why waste your time?” Whit reminds her of the story of Mary, who washed Jesus’ feet with a bottle of perfume, one worth a year’s wages. When Renee calls her sacrifice a waste, Whit replies with, “Mary wanted to give her very best…to Jesus. As God, doesn’t he deserve our very best?” and “What’s true for Mary is true for all of us…. We should never offer anything but our best to him.” Olivia agrees that Irena’s mom was is important to the story, and all Olivia really wanted from the beginning was more attention. She re-joins the play. Renee also decides to do her best on the program, promising, “No more shortcuts.”