From AIOWiki
Jump to navigation Jump to search
Irena Sendler 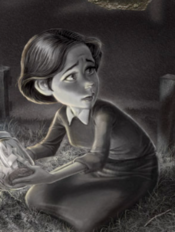 Irena Stanisława Sendler was born February 15th, 1910 in Warsaw Poland. Irena was baptised at the age of 7 and her father, Stanisław Henryk Krzyżanowski, raised her with strong moral values - often telling her “If you see someone drowning, you must jump in to save them, whether you can swim or not.”. Her father was only 1 of very few Polish Doctors who were willing to give medical care to the Jews, and he compassionately cared for them during the 1917 Typhus outbreak - an illness which is contagious and would claim his own life because he refused to stop caring for the Jews.

Irena spent 2 years studying at college, but chose to stop attending due to the segregation which was implemented against the Jews. She even defaced the "non-Jewish" identification on her grade card. A few years later, after being turned down to teach many times, she became a Social Worker which had a dozen or more women - the same circle of women who would later engage in rescuing Jews. Before the war, Irena worked most of the time with single mothers and their fatherless children.

When the German Nazi Army took control of Poland on November 1st, 1939 - they almost immediately ordered the banning of Jews from working in Welfare Department. They also banned anyone - like Irena - from helping or assisting the Jew in any form. On Sendler's initiative, she began generating false medical documents, needed by the soldiers and poor families to obtain aid. Sendler also created other false references and pursued ingenious schemes in order to help Jewish families and children excluded from their department's social welfare protection. This work was done at huge risk, as—since October 1941—giving any kind of assistance to Jews in German-occupied Poland was punishable by death, not just for the person who was providing the help but also for their entire family or household

Irena's personal life was a sad one, her daughter even says that she was not there for her children and was too absorbed into her social work passion and career - going on to say that they were raised by the family's housekeeper. Irena's marriages didn't fair much better.

But God can use anyone for His purposes, and He used Irena Sendler in a mighty way to save so many Jewish children. Many of whom counted Irena as "One of my Mothers".

Irena Sendler continued to work and later became a vice-principal of a local school. She applied for partial disability in 1967 but continued to work until 1983. Irena lived in Warsaw for the remainder of her life. She died on 12 May 2008, aged 98, and is buried in Warsaw's Powązki Cemetery.

Irena Sendler has appeared in 3 episodes, has been voiced by 2 actors, and has received an average user rating of 89.7%.
Retrieved from "https://www.aiowiki.com/w/index.php?title=Irena_Sendler&oldid=266982"
Categories:
Hidden categories: