From AIOWiki
(Redirected from One More Name)
Jump to navigation Jump to search
#813: “One More Name, Part 1” 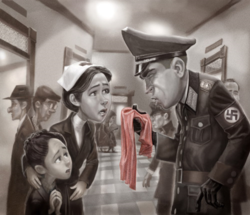 14For if you remain silent at this time, relief and deliverance for the Jews will arise from another place, but you and your father's family will perish. And who knows but that you have come to royal position for such a time as this?"
Songs Included
[[{{{song}}}]]
Inventions Used
[[{{{invention}}}]]
Featured Charity
[[{{{charity}}}]]
Short Used
[[{{{short}}}]]
Spanish Name
{{{spanish_name}}}
Spanish Airdate
Error: Invalid time.
Soundtrack length
3:00
Previous title
“In Jars of Clay, Part 1”
Host
Chris Anthony
Written by
Kathy Buchanan
Directed by
Kathy Buchanan
Produced by
Nathan Hoobler
Kathy Buchanan
Executive Producer
Dave Arnold
Post-Production by
Christopher Diehl
Production Assistant
[[{{{production_assistant}}}]]
Engineered by
Unknown
Music by
John Campbell
Songs by
Unknown
Other websites

To save Jewish children from the Nazis, a Polish social worker agrees to smuggle them out of the Warsaw Ghetto.