From AIOWiki
Jump to navigation Jump to search
“Welcome to Whit's End”Download Podcast! 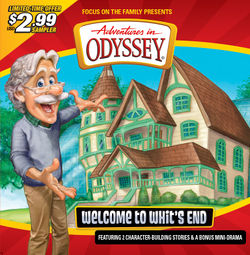 “Welcome to Whit's End” is a special episode of the Adventures in Odyssey audio series. It was written and directed by Nathan Hoobler, and will air in 2010.

Chris takes a tour around Odyssey, showing all of the different places and people.

Wooton Bassett: Sorry, I was having a Bassett orange level crisis.

Chris Anthony: Well, that clears it right up. What's a discovery emporium?