From AIOWiki
Jump to navigation Jump to search
#817: “Unfair Game” 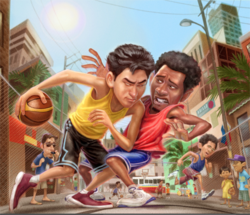 44But I tell you: Love your enemies and pray for those who persecute you,
John 13:35
35By this all men will know that you are my disciples, if you love one another."
Romans 12:8
8if it is encouraging, let him encourage; if it is contributing to the needs of others, let him give generously; if it is leadership, let him govern diligently; if it is showing mercy, let him do it cheerfully.
Songs Included
[[{{{song}}}]]
Inventions Used
[[{{{invention}}}]]
Featured Charity
Sports Ambassadors
Short Used
[[{{{short}}}]]
Spanish Name
{{{spanish_name}}}
Spanish Airdate
Error: Invalid time.
Soundtrack length
2:57
Previous title
“{{{name2}}}”
Host
Chris Anthony
Written by
Marshal Younger
Directed by
Dave Arnold
Produced by
Nathan Hoobler
Executive Producer
Dave Arnold
Post-Production by
Christopher Diehl
Production Assistant
[[{{{production_assistant}}}]]
Engineered by
Unknown
Music by
John Campbell
Songs by
Unknown
Other websites

You need to enable JavaScript to vote.
A Perfect Testimony
Unfair Game
Swept Away, Part 1

A cocky basketball player tests Marvin Washington’s patience during a mission trip to the Philippines.