From AIOWiki
Jump to navigation Jump to search
Tamika Washington 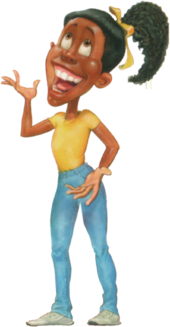 Tamika Washington is rather subdued and generally respectful of adults, though she sometimes has a bit of a smart mouth when they aren't around. While generally a sweet girl, she's protective of her family and tends to guard them from outsiders. Rather mature for her age, she has a developed sense of right and wrong, and as the second oldest child, is occasionally bossy. She's a bit of a perfectionist, if not an overachiever. Tamika is very sharp, and has a tendency to get far ahead of everybody else in everything. She is, however, occasionally rather thoughtless, having once let a lobster out of a tank thinking "He probably didn't get to say good bye to his family!"

Tamika has two siblings: Marvin, and Antoine, who is away at college and has never appeared on the show. For a while their cousin Xavier Washington lived with them, though he now lives with his mother. Her parents are Ed and Elaine Washington. She currently is 'sisters' with Kelly, a girl the Washingtons have taken in.

Tamika is a very good keyboard/piano player, and also enjoys writing songs. She and Kelly recently found that they have that in common and occasionally do it together.