From AIOWiki
Jump to navigation Jump to search
Jesus Christ 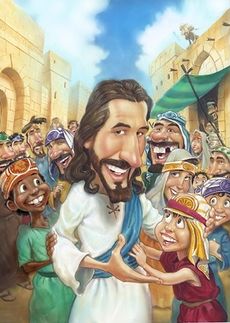 Jesus Christ was born in Bethlehem, after His earthly father, Joseph (b), was called there to register his name. He was born in a stable, where three shepherds came to visit Him. 2 or 3 years later, He was visited by 3 wise men, or Magi. King Herod tried to kill Him because of his jealousy, after hearing that Jesus would be the king of all. But God protected Him.

When He was several years older, He went to a Passover dinner with his parents; they lost Him, but found Him in the temple talking with the elders.

Years after that, He went into the wilderness and fasted 40 days and nights. After the 40 days, Satan came to tempt Him to do evil, but Jesus stood His ground, and Satan backed off. After He did this He was famished, so angels came to tend to His needs. Finally, He went to get baptized by John the Baptist. Then He began His ministry, finding 12 disciples to train to be able to preach themselves. He angered the priests of Israel, so they bartered with Judas, one of Jesus' disciples, to hand Him over to them. After being tried but found innocent, the crowd turned into a mob. So, Pilate gave the people a choice between crucifying a murderous criminal named Barabous, and crucifying Jesus. The people chose Jesus. So, Jesus carried His cross onto the hill of Calvary, and was humiliated and crucified there. Some friends of His took His body and lay it in a tomb. The priests didn't want the disciples to pretend Jesus came back to life, so they put a big rock in front of the tomb, and posted guards. However, after three days, as He said He would, Jesus rose from the dead. He rose up to Heaven several days after that, and gave His disciples the Holy Spirit, to help them go out into the world.

God is His father, and Christians are his brothers/sisters/sons/daughters. He is a descendant of King David.

Jesus Christ has appeared in 32 episodes, has been voiced by 9 actors, and has received an average user rating of 88.1%.