A Predicament of Biblical Proportions

From AIOWiki
Jump to navigation Jump to search
#797: “A Predicament of Biblical Proportions” 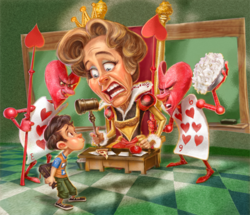 You need to enable JavaScript to vote.
The Boat People, Part 2
A Predicament of Biblical Proportions
A Forgiving Heart

An awkward boy with an overactive imagination moves to Odyssey and has his faith put to the test.

Leonard "Buddy" Norman is unpacking boxes in his room when his dad walks in. They start unpacking together, and Buddy tells his dad about his week.

Dropped off at school, Buddy has a daydream of all the kids in school pointing at him and yelling, "New kid! New kid!" Of course, it was only a daydream. Sensing his own stress, Buddy finds a quiet spot to pray: his locker. Unfortunately, his locker just happens to be around the corner from Dion's! Dion is busy grilling Gavin Thomas about joining Vance's "team," and tells him that he has to be tough. Don’t smile; frown and growl, he says. And the best people to growl at are the "religious" kids carrying Bibles! Suddenly, Buddy's phone beeps. Dion turns around, and, wanting to make a lesson out of Buddy, instructs Gavin to growl. He does, and Buddy finds himself transported to the Old West! Dion and Gavin become a rustler and a wolf, ready to pounce on the sheep in their way – Buddy. Just when they're ready to tie him to the tracks, Buddy snaps out of it. Dion warns him to not cross their paths again, or he'll sic "Gavin the Growler" on him.

Later in class, Buddy bumps into Emily Jones, who shows off her detective skills by announcing his first and last names, along with his nickname. After she says that she'd be happy to fill him in "on the way things work around here," that phrase buzzes around in his head, causing yet another daydream. This one doesn't last long, though, and Emily invites him to sit with her at lunch, and to introduce him to someone special. Lunch comes, and Buddy meets Matthew Parker. The two of them learn from just a smudge on Buddy's finger that he is a left-hander who likes to draw. This leads him to a daydream parodying Sherlock and Dr. Watson, with Emily and Matthew finding out random facts about him: he throws his dirty socks on the floor of his closet, he is 12 years, 5 months, and 3.275 days old, he chews his fingernails, and has 'Tubby the Choo-Choo' pajamas and slippers. Coming back to reality, the lunch bell rings, and everyone heads back to class. After a side comment from Emily that "too bad bringing a Bible to school isn't illegal," Buddy starts to think. After school, he winds up at Whit's End, where he sees Mr. Whittaker not as himself, but as Willy Wonky, the sugar-crazed ship captain!

The next day, Ms. Adelaide addresses the class, stating that bringing a Bible to school the next day (which happens to be Bring Your Bible to School Day) is not "illegal," but it should not be used during times of teaching. After all, school should be a place for Freedom from Religion. "You mean Of, right?" Buddy asks. Ms. Adelaide’s eyes flair up, and Buddy finds himself in a courtroom with an angry Queen of Hearts, condemned to angry ravings and a banana-cream pie in the face!

Buddy feels confused. Was Ms. Adelaide telling him not to bring a Bible? He goes for a walk — at lunch (which his mother has already grounded him for, he explains) — and finds Mr. Whittaker in a park nearby. He learns that Mr. Whittaker is actually like his own dad — kind, understanding, a Christian and wise. Whit encourages Buddy to bring his Bible tomorrow — not to make a big deal of it, but to exercise his right to do so.

The next day, Buddy brings his Bible. He reads it during lunch... and is caught by Dion! With Gavin close behind, Dion tries to 'sic' him on Buddy. Gavin is hesitant, so Dion raps on the table, stands up, and yells that "Buddy Boy" has something to say about his Bible! Time shifts into slow motion; the clock on a wall bangs in Buddy’s ears. But he stands up and explains, "I'm carrying this Bible to let you know who I am. I believe in what the Bible says, and I try to live out what it says. I think it tells us how to be better people, and care more, and serve the world around us the way God wants us to."

Silence fills the cafeteria. Then Emily stands up and speaks; so does Matthew, and lots of others. Then Gavin stands and speaks, too! Looking to Ms. Adelaide for help (and finding none), Dion is defeated.

Dion Farkus: What is your malfunction?

Gavin Thomas: I'm Gavin Thomas. And I don't have my Bible with me. I left it in my locker, 'cause I was afraid of what other people would say.
Dion Farkus: Gavin! You need to sit down, dude.
Gavin Thomas: No, Dion. I need to stand up.

Gavin Thomas: I'm gonna go get my Bible, 'cause I believe what it says too! Just like Buddy here.

Dion Farkus: Gavin, what came over you?
Gavin Thomas: You wanted me to join a team, Dion? Well, I guess I just did.