From AIOWiki
Jump to navigation Jump to search
#749: “The Drop Box” 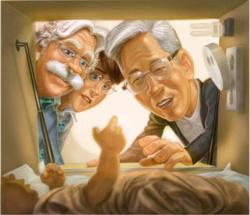 You need to enable JavaScript to vote.
The Perfect Gift
The Drop Box
All By Myself

During a visit to South Korea, Whit and Eugene meet a pastor who has turned his home into a safe haven for abandoned children.

John Whittaker: Ok, how big should we make this (drop box)?
Eugene Meltsner: Well, the average length of a newborn infant is 52 centimeters.
Rhee Jung Won: How do you know that?
Eugene Meltsner: Doesn't everybody?