From AIOWiki
Jump to navigation Jump to search
#798: “A Forgiving Heart” 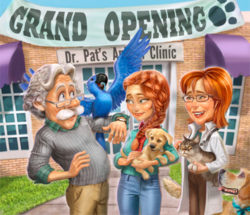 Promo
Sample
Not Available
Rating
Current user rating: 75/100% (12 votes)
You need to enable JavaScript to vote.
A Predicament of Biblical Proportions
A Forgiving Heart
Where Your Treasure Is

Renee's aunt moves to Odyssey to open a veterinary clinic, but a figure from her past threatens to ruin the celebration.