From AIOWiki
Jump to navigation Jump to search
#897: “Teach a Man” 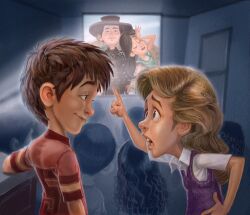 You need to enable JavaScript to vote.
The Forever Gift
Teach a Man
The Rydell Revelations, Part 1

Local teens learn how to film inspirational stories when Jay follows Zoe on a mission trip to Honduras.

1. What did you think of the "actor reenactment" of Jay and Zoe's first meeting?

2. Based on what you heard in this month's Adventure, would you be interested in going on a short-term mission trip someday? Why or why not? If you've already been a missionary, talk about that experience (length of trip, type of service, special connections made, etc.). How did you see God work in the people, the circumstances . . . and in you?

4. If you were Whit, would you have trusted Jay to lead a group by himself? Why or why not? Why do you think Whit lets kids try new things even when he's pretty sure they'll make mistakes?

5. Why did so many of the teens abandon Zoe's group and join Jay's? Which group would you want to be part of?

6. Read Luke 6:40. Point out several differences between Jay's and Zoe's methods of "fully training" others to shoot video on a tablet. In addition to reading books and watching videos, how could Zoe have prepared better for this trip?

7. Suppose a teacher at school puts you in charge of a group project. What did you learn from this episode that would help you be a better leader?

8. Although little Miguel wasn't nearly as needy as Zoe expected, her heart was in the right place (Matthew 25:37-40, Proverbs 21:13). How has your family reached out to children in need? And how do you decide which ministries to support?

9. At first, Zoe thought Selena's cousin's story wasn't worth telling because it didn't fit a certain formula. What did Zoe learn after meeting him (and little Miguel), and how can you apply that lesson in your own life?