From AIOWiki
Jump to navigation Jump to search
#746: “The Lone Lawman” 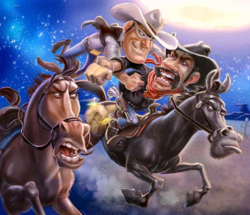 8And the word of the LORD came again to Zechariah:

9"This is what the LORD Almighty says: 'Administer true justice; show mercy and compassion to one another.

10Do not oppress the widow or the fatherless, the alien or the poor. In your hearts do not think evil of each other.'
Hebrews 4:16
16Let us then approach the throne of grace with confidence, so that we may receive mercy and find grace to help us in our time of need.
Songs Included
[[{{{song}}}]]
Inventions Used
[[{{{invention}}}]]
Featured Charity
[[{{{charity}}}]]
Short Used
[[{{{short}}}]]
Spanish Name
{{{spanish_name}}}
Spanish Airdate
Error: Invalid time.
Soundtrack length
2:45
Previous title
“{{{name2}}}”
Host
Chris Anthony
Written by
Robert G. Lee
Directed by
Dave Arnold
Produced by
Nathan Hoobler
Executive Producer
Dave Arnold
Post-Production by
Nathan Jones
Production Assistant
[[{{{production_assistant}}}]]
Engineered by
Unknown
Music by
John Campbell
Songs by
Unknown
Other websites

You need to enable JavaScript to vote.
Like a Good Neighbor
The Lone Lawman
Thirty Jays Hath September

Jason, Red and Whit and the other Odyssey characters perform a new KYDS Radio show set in the wild west. A young boy gets mixed up with a gang of bank robbers. Can a hero on horseback save the day?