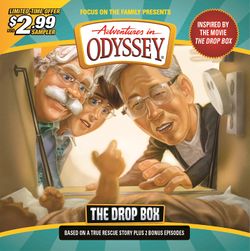 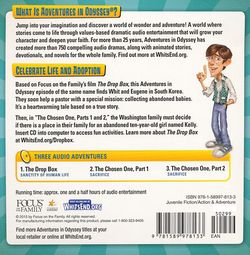 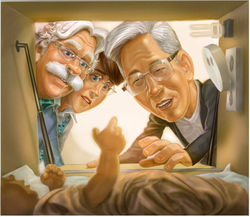 Whit and Eugene are far away from Whit’s End! In this new adventure, they meet a local pastor in South Korea whose home is overflowing with children. What on earth is going on? Why are women abandoning their babies? And how can Whit and Eugene help? Based on the amazing true story of Pastor Lee Jong-rak, “The Drop Box” will pull at your heartstrings as it celebrates one man’s courage and the value of each and every life.

This sampler also features 2 bonus episodes, “The Chosen One, Parts 1 & 2.” A runaway girl named Kelly arrives at Whit’s End. When her story comes out, the Washingtons are faced with a life-changing decision.

Adventures in Odyssey is exciting, values-based audio entertainment for the whole family—brought to life by actors who make you feel like part of the experience. So grab your imagination and find out why over 20 million Adventures in Odyssey products have been distributed worldwide.