From AIOWiki
Jump to navigation Jump to search
#750: “All By Myself” 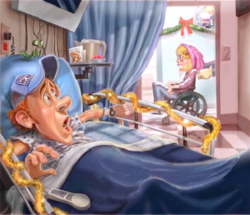 You need to enable JavaScript to vote.
The Drop Box
All By Myself
The Ties That Bind, Part 1

Wooton is quarantined in his house and has to find ways to entertain himself. Meanwhile, Penny tries to re-create a mountaintop experience with God.