From AIOWiki
Jump to navigation Jump to search
#795: “The Boat People, Part 1” 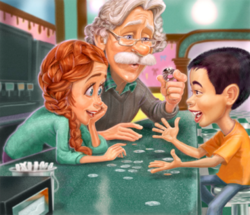 General   Crew   Links
Paired with
[[{{{split}}}|“{{{split}}}”]]
Released
July 1, 2016
Original Release Date
{{{rel_date}}}
Date Recorded
July 24, 2015
Recorded at
Salami Studios
Album
Odyssey Adventure Club: Season 3
Album
Odyssey Adventure Club: Season 3 ↓
Cassette No.
{{{cassette}}}
Intro
[[:Category:Episodes with {{{intro}}} intro| {{{intro}}}]]
Intros
Click to show or hide ↓
Wraps
[[:Category:Episodes with {{{wraps}}} wraps| {{{wraps}}}]]
Wraps
Click to show or hide ↓
Theme
Genre
Kids' Radio
Whit's History
Missionary
Scripture
Joshua 4:1-24
1When the whole nation had finished crossing the Jordan, the LORD said to Joshua,2"Choose twelve men from among the people, one from each tribe,3and tell them to take up twelve stones from the middle of the Jordan from right where the priests stood and to carry them over with you and put them down at the place where you stay tonight."4So Joshua called together the twelve men he had appointed from the Israelites, one from each tribe,5and said to them, "Go over before the ark of the LORD your God into the middle of the Jordan. Each of you is to take up a stone on his shoulder, according to the number of the tribes of the Israelites,6to serve as a sign among you. In the future, when your children ask you, 'What do these stones mean?'7tell them that the flow of the Jordan was cut off before the ark of the covenant of the LORD. When it crossed the Jordan, the waters of the Jordan were cut off. These stones are to be a memorial to the people of Israel forever."8So the Israelites did as Joshua commanded them. They took twelve stones from the middle of the Jordan, according to the number of the tribes of the Israelites, as the LORD had told Joshua; and they carried them over with them to their camp, where they put them down.9Joshua set up the twelve stones that had been in the middle of the Jordan at the spot where the priests who carried the ark of the covenant had stood. And they are there to this day.10Now the priests who carried the ark remained standing in the middle of the Jordan until everything the LORD had commanded Joshua was done by the people, just as Moses had directed Joshua. The people hurried over,11and as soon as all of them had crossed, the ark of the LORD and the priests came to the other side while the people watched.12The men of Reuben, Gad and the half-tribe of Manasseh crossed over, armed, in front of the Israelites, as Moses had directed them.13About forty thousand armed for battle crossed over before the LORD to the plains of Jericho for war.14That day the LORD exalted Joshua in the sight of all Israel; and they revered him all the days of his life, just as they had revered Moses.15Then the LORD said to Joshua,16"Command the priests carrying the ark of the Testimony to come up out of the Jordan."17So Joshua commanded the priests, "Come up out of the Jordan."18And the priests came up out of the river carrying the ark of the covenant of the LORD. No sooner had they set their feet on the dry ground than the waters of the Jordan returned to their place and ran at flood stage as before.19On the tenth day of the first month the people went up from the Jordan and camped at Gilgal on the eastern border of Jericho.20And Joshua set up at Gilgal the twelve stones they had taken out of the Jordan.21He said to the Israelites, "In the future when your descendants ask their fathers, 'What do these stones mean?'22tell them, 'Israel crossed the Jordan on dry ground.'23For the LORD your God dried up the Jordan before you until you had crossed over. The LORD your God did to the Jordan just what he had done to the Red Sea when he dried it up before us until we had crossed over.24He did this so that all the peoples of the earth might know that the hand of the LORD is powerful and so that you might always fear the LORD your God."
Songs Included
[[{{{song}}}]]
Inventions Used
[[{{{invention}}}]]
Featured Charity
World Vision
Short Used
[[{{{short}}}]]
Spanish Name
{{{spanish_name}}}
Spanish Airdate
Error: Invalid time.
Soundtrack length
2:20
Previous title
“{{{name2}}}”
Host
Chris Anthony
Written by
Phil Lollar
Directed by
Phil Lollar
Produced by
Nathan Hoobler
Executive Producer
Dave Arnold
Post-Production by
Christopher Diehl
Production Assistant
[[{{{production_assistant}}}]]
Engineered by
Nathan Jones
Music by
John Campbell
Songs By
Unknown
Other websites
Odyssey Scoop

A boy explains how his desperate family fled Vietnam—a dramatic tale that also involves Whit and a mysterious ring.