From AIOWiki
Jump to navigation Jump to search
#794: “Things Not Seen” 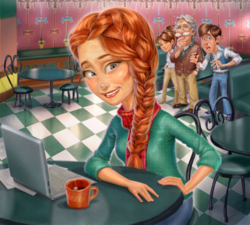 You need to enable JavaScript to vote.
The Good Soil
Things Not Seen
The Boat People, Part 1

Things get a little crazy when Whit hires an enthusiastic new intern with a lot to learn about faith.

The story starts out with Renee "writing" in her voice diary and talking to her dog, Cogito. She tells about her new job at Whit's End and proceeds to tell the story of her internship.

Whit briefly discusses Renee's faith with her, and then whisks her away to the Imagination Station. After her trip, he shows her around the shop, and the computer room, explaining how everything works, including a "Kill switch" that shuts down everything in Whit's End in case of an emergency. Renee returns the next day to work in the computer room, but Eugene finds her and demands to know why she is in an "Authorized Personnel Only" area. She explains she is authorized personnel; she's the new intern. Eugene has no recollection of Whit having an intern, and as Whit is unable to be disturbed (he's working hard on a new program), he tries to call Connie through a glitchy intercom to come up. The intercom is a pain to use, and eventually Connie gets frustrated and comes upstairs. She meets Renee for the first time too, having not known about her before!

Eugene is very doubtful of Renee's honesty, so she and Connie go to Whit's office to look for paper work - anything - proving her hiring. They don't. Renee tells Connie her story about her faith, and how she lost it. To lighten the occasion, Connie then invites her to the soda fountain to have a Wod-Fam-Choc-Sod. After Renee has downed her drink, Connie gives her a crash course in soda making, having her make one herself. She proceeds carefully, but just as she turns the mixer on, a power surge cuts through Whit's End! The blender's lid pops off, the soda explodes, and Connie retreats to the kitchen for towels.

While she's gone, Mr. Whittaker calls. He was working on the Imagination Station when the power surge happened, and he's in trouble. Even though it would mean a loss of his hard work, he tells Renee to hit the kill switch! When Connie gets back, Renee tries to put Connie on to talk to Whit, but the cell phone falls into Renee's Wod-Fam-Choc-Sod! Frantically they hurry upstairs to the computer room. After a struggle with Eugene (which ends with Connie stepping on his foot), Renee leaps and hits the switch. Everything goes dark, and a few seconds later... the program ends and Whit opens the Imagination Station! Whit explains everything over a real Wod-Fam-Choc-Sod, showing Renee that she needed faith to do what she did.

Renee finishes her journal, sings a quick verse of "Jesus Loves Me," and shuts down her computer — including her "Cogito" program.