From AIOWiki
Jump to navigation Jump to search
#793: “The Good Soil” 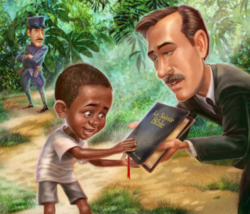 3Then he told them many things in parables, saying: "A farmer went out to sow his seed.

4As he was scattering the seed, some fell along the path, and the birds came and ate it up. 5Some fell on rocky places, where it did not have much soil. It sprang up quickly, because the soil was shallow. 6But when the sun came up, the plants were scorched, and they withered because they had no root. 7Other seed fell among thorns, which grew up and choked the plants. 8Still other seed fell on good soil, where it produced a crop--a hundred, sixty or thirty times what was sown.

9He who has ears, let him hear."
1 Corinthians 3:5-8
5What, after all, is Apollos? And what is Paul? Only servants, through whom you came to believe--as the Lord has assigned to each his task.

6I planted the seed, Apollos watered it, but God made it grow. 7So neither he who plants nor he who waters is anything, but only God, who makes things grow.

8The man who plants and the man who waters have one purpose, and each will be rewarded according to his own labor.
Isaiah 55:11
11so is my word that goes out from my mouth: It will not return to me empty, but will accomplish what I desire and achieve the purpose for which I sent it.
Songs Included
[[{{{song}}}]]
Inventions Used
[[{{{invention}}}]]
Featured Charity
[[{{{charity}}}]]
Short Used
[[{{{short}}}]]
Spanish Name
{{{spanish_name}}}
Spanish Airdate
Error: Invalid time.
Soundtrack length
2:53
Previous title
“{{{name2}}}”
Host
Chris Anthony
Written by
Phil Lollar
Directed by
Phil Lollar
Produced by
Nathan Hoobler
Executive Producer
Dave Arnold
Post-Production by
Nathan Jones
Production Assistant
[[{{{production_assistant}}}]]
Engineered by
Unknown
Music by
John Campbell
Songs by
Unknown
Other websites

You need to enable JavaScript to vote.
When One Door Closes, Part 2
The Good Soil
Things Not Seen

Based on a true story, a medical missionary encounters soldiers, cannibals and true love in the Congo. But is his work in vain?