Out of Her Element

From AIOWiki
Jump to navigation Jump to search
#888: “Out of Her Element” 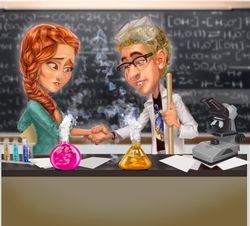 3Do nothing out of selfish ambition or vain conceit, but in humility consider others better than yourselves.

4Each of you should look not only to your own interests, but also to the interests of others. 5Your attitude should be the same as that of Christ Jesus: 6Who, being in very nature God, did not consider equality with God something to be grasped, 7but made himself nothing, taking the very nature of a servant, being made in human likeness.

You need to enable JavaScript to vote.
Unsinkable, Part 2
Out of Her Element
Young Whit and the Revolutionary Secret

Desperate to improve her chemistry grade, Renee agrees to let Horus help her prepare for the final exam.