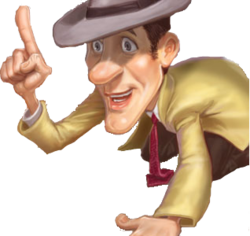 A bumbling private eye who looks and sounds remarkably like Officer David Harley. Harlow is the most clueless detective anyone could ever hope to meet. He got his start working "undercover" in the bedding and sheets department of a local store, and his career has gone downhill since. You can spot Harlow (when he's not trying to camouflage himself) puttering about the streets of Odyssey in hot pursuit of law-abiding citizens he thinks are criminals.

Harlow Doyle was actually made up after writers decided that the police officer, David Harley, was a bad impression because many police officers actually were really smart. As a result many of the episodes involving Officer Harley were rewritten, some of which involved Harlow. He's incredibly gullible as he actually believed that the Terror from the Skies drama was an actual news broadcast, even after the drama ended.

In #196: “Harlow Doyle, Private Eye”, Harlow speaks often about his mother. We learn in #207: “The Case of the Candid Camera” that he has a brother who apparently makes signage. An older brother is also mentioned in #252: “The Bad Hair Day”, but whether this is the same or another brother is unknown.