From AIOWiki
Jump to navigation Jump to search
George Washington 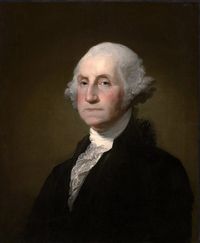 George Washington was the first President of the United States of America. He appeared in Irwin Springer's dream in The Day Independence Came. In it he was a very devout man of God leading the Continental Army.

George Washington has appeared in 2 episodes, has been voiced by 2 actors, and has received an average user rating of 86.5%.
Retrieved from "https://www.aiowiki.com/w/index.php?title=George_Washington&oldid=212272"
Categories:
Hidden categories: