From AIOWiki
Jump to navigation Jump to search
#814: “One More Name, Part 2” 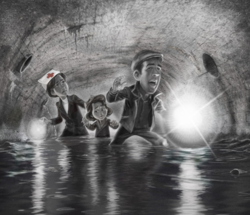 5He who overcomes will, like them, be dressed in white. I will never blot out his name from the book of life, but will acknowledge his name before my Father and his angels.
2 Timothy 2:19
19Nevertheless, God's solid foundation stands firm, sealed with this inscription: "The Lord knows those who are his," and, "Everyone who confesses the name of the Lord must turn away from wickedness."
Songs Included
[[{{{song}}}]]
Inventions Used
[[{{{invention}}}]]
Featured Charity
[[{{{charity}}}]]
Short Used
[[{{{short}}}]]
Spanish Name
{{{spanish_name}}}
Spanish Airdate
Error: Invalid time.
Soundtrack length
3:20
Previous title
“In Jars of Clay, Part 2”
Host
Chris Anthony
Written by
Kathy Buchanan
Directed by
Kathy Buchanan
Produced by
Nathan Hoobler
Kathy Buchanan
Executive Producer
Dave Arnold
Post-Production by
Nathan Jones
Production Assistant
[[{{{production_assistant}}}]]
Engineered by
Unknown
Music by
John Campbell
Songs by
Unknown
Other websites

Secrets are revealed as Irena and her friends search for creative new ways to sneak more Jewish children to safety.