From AIOWiki
Jump to navigation Jump to search
Cristina Vee 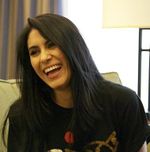 Cristina Vee is a voice actress from Los Angeles, CA. Since getting her first large anime roles in 2007, Cristina has voiced over 100 characters in both animation and video games. She won the Audio Theatre Central Seneca Award for her performance as Irena Sendler in the Odyssey episode One More Name.