From AIOWiki
Jump to navigation Jump to search
Philece Sampler 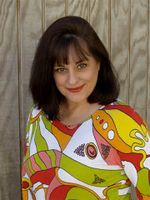 Philece P. Sampler is an American voice actress and television actress, whose credits include various characters in anime. She also goes by the aliases of Sue Beth Arden, Victoria Pryne, and Debra Cunningham. She got her start on the serial Days of Our Lives and the soap opera Another World.

Philece's vocal range has demonstrated the ability to play male roles (Cody from Digimon), old women roles (Tiptory in Eureka Seven and Toph in The Legend of Korra), as well as being able to use her normal voice in many roles.