From AIOWiki
Jump to navigation Jump to search
#893: “Badges of Honor” 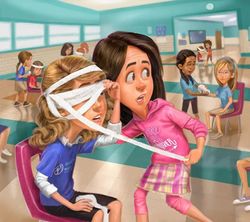 You need to enable JavaScript to vote.
Millstones
Badges of Honor
The Forever Gift

Lagging behind other girls in their troop, Olivia and Zoe set out to earn as many merit badges as they can.

Back in the Saddle