From AIOWiki
Jump to navigation Jump to search
#765: “Follow Me” 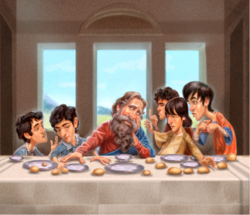 You need to enable JavaScript to vote.
The Ties That Bind, Part 14
Follow Me
The Cure, Part 1

Journey to Galilee as Whit imagines what might have happened had Jesus' disciples known each other as boys.

What if Jesus' disciples knew each other...as kids! Which ones got along? Did they ever get in trouble by throwing fish guts at each other? In the new Kids' Radio adventure "Follow Me," Whit shares a story at the shores of Galilee that is fictional, yet based on the actual personalities as described in the bible. See how the decisions we make when we're young shape us as we grow.