31Then, because so many people were coming and going that they did not even have a chance to eat, he said to them, "Come with me by yourselves to a quiet place and get some rest."
Matthew 19:5
5and said, 'For this reason a man will leave his father and mother and be united to his wife, and the two will become one flesh'?
Ephesians 5:22-33
22Wives, submit to your husbands as to the Lord.

23For the husband is the head of the wife as Christ is the head of the church, his body, of which he is the Savior. 24Now as the church submits to Christ, so also wives should submit to their husbands in everything. 25Husbands, love your wives, just as Christ loved the church and gave himself up for her 26to make her holy, cleansing her by the washing with water through the word, 27and to present her to himself as a radiant church, without stain or wrinkle or any other blemish, but holy and blameless. 28In this same way, husbands ought to love their wives as their own bodies. He who loves his wife loves himself. 29After all, no one ever hated his own body, but he feeds and cares for it, just as Christ does the church-- 30for we are members of his body. 31"For this reason a man will leave his father and mother and be united to his wife, and the two will become one flesh." 32This is a profound mystery--but I am talking about Christ and the church.

You need to enable JavaScript to vote.
Avery Award Winner!
This episode won an Avery Award for Best Episode in the 2017 Season!

The Bassett and Wise families have arrived in town for Wooton and Penny’s big day, but a damaged dress, stomach pains, and an investigation into a missing ring mean that the couple’s walk to the altar will be anything but simple. 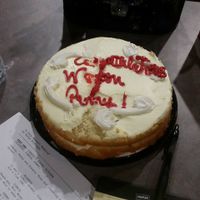 Wellington Bassett: No one gets away with scamming a Bassett!

Eleanor Wise: I'll tell you, I remember breaking my leg when I was five, but that doesn't make it special.