From AIOWiki
Jump to navigation Jump to search
Captain Absolutely 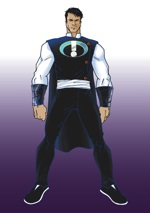 Captain Absolutely is a comic-book character created by Wooton Bassett in TTC02: The Truth Be Told. He started out as a librarian named Josiah King. His friend Darren Gray (later to become Dr. Relative) accidentally blew up the computer. Josiah, having been thrown in the explosion, found the Bible. Having never seen one, (it having been banned from the hands of the people by the local government), Josiah was full of curiosity, and started to read it. That night he gave his life to the Lord. Being affected by the fumes from the explosion, he gained the ability to fly and super strength. He became the super hero Captain Absolutely. After that he faced several villains defying God and the truth to get what they want. However with the truth he always won.