The Way of the Comic Book

From AIOWiki
Jump to navigation Jump to search
#937: “The Way of the Comic Book” 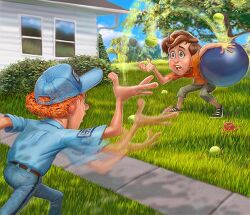 You need to enable JavaScript to vote.
Drake and the Aberrant Automaton
The Way of the Comic Book
Knox on Love

1. Do you have a favorite superhero? What makes that person special or worthy to be called a "hero"?

3. What habits can help us live for Jesus and send the devil running (James 4:7)? Read Ephesians 6:10-18 to learn about the special armor that will protect us from any spiritual attack.

4. Buddy was eager to create comics, but Wooton said, "You have to master the basics first." When have you wanted to learn a new skill, only to discover that you had to start slowly and practice things that weren't much fun? What happened?

5. How did Buddy and Wooton respond differently when Jay said their villains were lame? How can James 1:19-20, Proverbs 15:1 and 1 Peter 2:23 help us keep our cool and honor God in the face of criticism? And why is prayer a good next step?

6. Can you recall a time when someone criticized you or something you created? How did that make you feel?

7. Sometimes it's necessary to correct others and offer constructive criticism. The key is how we do it. Discuss healthy and unhealthy ways to share hard truths, and how Proverbs 18:2 applies. If someone needed to correct you, how would you prefer that they do it?

8. In your own words, what is pride? How can holding onto it—like clinging to the exercise ball—keep us from growing and improving?

9. Imagine you're working on a creative project with some friends. On a scale of 1 to 10, how open are you to using the best ideas, no matter whose they are?