From AIOWiki
Jump to navigation Jump to search
#740: “The Launch, Part 2” 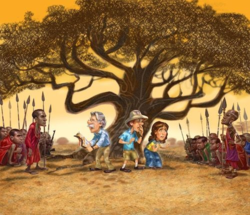 A violent cattle raid makes peace between the battling tribes seem impossible as Whit and Wooton's visit to Uganda reaches a dramatic conclusion.

Wooton Bassett: Stick out your tongue, Mosie. Oh, yeah, better. I mean it would be hard not to look better when you’re recovering from a wooden tongue.