From AIOWiki
Jump to navigation Jump to search
#920: “Snow 'Em Who's Boss” 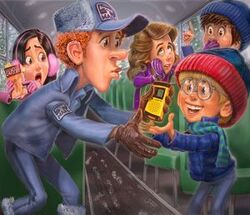 You need to enable JavaScript to vote.
Sew on and Snow Forth
Snow 'Em Who's Boss
Make Snow Mistake

Wooton takes a group of kids to a leadership retreat. Who will take charge when their bus slides off the road?

This is a four-part episode, with each episode happening concurrently.

1. What qualities make a leader worth following? Together, see if you can come up with 10 traits of a good leader.

2. Share specific examples of good and bad leaders. They may be people you've read about in history books or ones you've encountered personally.

3. Have you ever been in a tight spot like our friends on the bus? What happened? Who stepped up to lead in that situation, and how?

4. If you'd been on the bus with Zoe and the others, which leadership candidate would have gotten your vote? Why? Who proved to be the best leader?

6. Cite three poor leadership decisions made by characters in our latest Adventure. What should they have done instead? Were there also examples of good leadership?

7. Are there ways a person can still be a leader even when they're not in charge? What might that look like?

8. Judges 21:25 says, "In those days Israel had no king; everyone did as he saw fit." Do you think that worked out well for God's people? Why or why not?

9. In 1 Samuel 8, Israel asked for a king so they could be like other nations. God was disappointed. He wanted His people to view Him as their King. How do you think the world would be different if everyone made God their leader and followed Him?

10. According to Olivia, the handbook said, "A good leader sacrifices himself for his team." Can you think of any leaders—in stories or in real life—who did that?