No Cause for Concern

From AIOWiki
Jump to navigation Jump to search
#785: “No Cause for Concern” 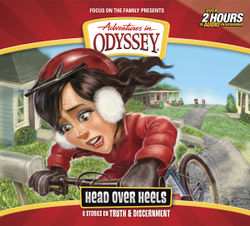 You need to enable JavaScript to vote.
Cycle of Fear
No Cause for Concern
The Case of the Ball Cap Hero

“No Cause for Concern” is episode #785 of the Adventures in Odyssey audio series. It was written and directed by Nathan Hoobler, and originally aired on March 19, 2016.

Penny gets an opportunity to practice believing the best about Wooton when she finds out that he’s been looking into her background and public records.

The episode opens with Penny and Jacques Henri at the art gallery, organizing paintings. Jacques teases Penny about being in love, and then Detective Polehaus walks in. He asks to talk alone with Penny and tells her that he has always had a soft spot for pathetic cases, and therefore he is telling her that a man came into the station asking about Penny's connection to Dr. Trask and the Green Ring Conspiracy, and that the strange man got a copy of all of Penny's criminal history from the county courthouse. Detective Polehaus was not on duty when it happened, and he has no clue who it was. At the college bookstore, Penny is looking at books with Connie. Connie asks what Penny is going to do, and Penny replies she is going to use it as 'fodder for her pre-marital counseling homework'. As in, she is going to practice assuming the best. For example, she says, she gets a call that Wooton has to work late, and so she is going to assume it is for a good reason, instead of thinking that Wooton doesn't have time for her. She says that whoever was looking at her criminal records probably had a good reason. They get to the checkout counter, and the checkout lady comments that she is an assistant to the dean of the art department, Penny's old job. The lady says that someone was asking about Penny the day before. She didn't know the name, but the person wanted to know everything possible about Penny. The description of him was about six feet, curly red hair, brown eyes, and a sharp chin. Both Penny and Connie realize it must have been Wooton.

At the park, Penny worries to Connie why in the world Wooton would want her public records. She wonders if he doesn't trust her, or if he thinks that she's actually a counterfeiter. Connie reminds Penny about assuming the best. Penny then decides that Wooton is perhaps putting together a special wedding gift, and he needs to know details that she hasn't told him. She decides she needs to tell him if he wants to know.

At Hal's Diner, Penny and Wooton are waiting to order breakfast, and Penny inquires about what super-personal things about her Wooton would want to know. She volunteers some information, and Wooton asks why would he need to know this stuff. Penny hints that perhaps he is working on something special, and Wooton replies that if he was she wouldn't need to tell him anything else. She gives him permission to ask anyone anything regardless, and Wooton says thank you, but he would never do that, he would ask her no matter what. Penny hints that perhaps her criminal records would need to be assessed, but Wooton denies it. They order breakfast, Penny completely bewildered.

At the art gallery, Jacques is comparing a painting of a rock and a flower to Wooton and Penny. He says Wooton is solid and unflakeable, especially when he came in earlier that day to pick up Penny's employment history. Penny assumes this is for a good reason, and Jacques says that Wooton said it was for their marriage license. Penny says they got their marriage license a week before, and that employment records are not required to get one in the first place. She begins to wonder if Wooton is lying to her. She walks out of the gallery, intent on confronting Wooton. At the library, Penny completely startles Wooton by coming in on him. He is standing in the checkout line and he hides the books that he is holding under the counter, and she asks what they are. He pulls them out and shows her that they are paintings by Claude Lorrain, Penny's favorite artist. He says that they are needed for her special surprise. He apologizes for being so secretive. She says she likes surprises for good things; then, she wonders how to prove she believes the best about him before asking a question that sounds like she doesn't. He says go ahead, and she asks why he needed her employment history. He says he didn't, and that Jaque must be mistaken because he would never go behind her back and do something like that. She asks about the criminal records, and he says he wouldn't look at those either. As they are talking the librarian ushers them up to check out, and asks if Wooton found everything he was looking for in the newspaper archive. He replies that he wasn't in the newspaper archive, and the librarian replies that she helped Wooton log in because he was looking for information on Penny Wise. He denies it, and the librarian says that it must have been someone who looks and sounds just like Wooton. Wooton gets out of line, and then pulls out his cell phone and dials a number. A cell phone begins ringing in the library, and Wooton begins chasing the sound, Penny on his tail. They come upon Wellington!

Wooton demands to know what Wellington is doing there, while Penny marvels how identical they are. Wellington confirms every accusation, wanting to talk to Wooton alone. Penny leaves to go find Connie, and Wellington takes Wooton across the street to a bistro to talk. Meanwhile, Penny and Connie are planning the wedding. Connie asks why in the world Penny is nervous, and Penny replies that wouldn't Connie be nervous if her fiance's twin brother was looking for any scrap of information he could use to break up the relationship? Connie says yes, but that Wooton would always give Penny the benefit of the doubt. Penny says that yes, Connie is right, and they go back to planning the wedding.

At the bistro, Wooton tells Wellington that he didn't tell Wooton about anything he didn't already know. Wellington accuses Penny of being a gold-digger. Wellington says that a private detective had been hired to investigate Penny after the engagement had been announced. Wellington tells Wooton that Penny's other fiance, Devon, was wealthy, and then says that after they broke up, she cozied up to Dr. Trask, and then to Wooton. Wooton completely denies it. He says he could see how it would look that way, but Wellington doesn't actually know Penny. Wellington pinpoints everything that has happened thus far, and Wooton doesn't know what to say, but still denies it. Wellington pulls out an envelope and tells Wooton to open it after he leaves.

Later, Penny and Wooton are looking at the envelope Wellington gave him. It contains Penny's credit report and all the debt that she has. Penny says she is glad she already told Wooton about it, otherwise it would have been a real bombshell. He promises that they can work together to pay it off, and says he knows Penny is not marrying him for money. She thanks him for thinking the best of her. She says that because she loves him, she has told him about the things she is ashamed of, like her debt. Penny asks if Wellington will change his mind when he finds out. "Of course I won't change my mind!" Wellington says. He admits that he is impressed with the way that Wooton and Penny are sticking to each other, he says he'll inform the family, and not to expect any of the Bassett family to come to the wedding. Penny kindly invites Wellington and his family to come to the wedding. He says he'll think about it, and leaves.

Penny and Wooton are sitting looking at a book, reminiscing. Connie walks up and asks what it is, and Penny replies that it is her wedding present, a graphic novel about Penny and Wooton's relationship. Connie complains that it is way too early to do that, and Wooton admits he was too excited to wait. Penny asks Wooton about one thing that she doesn't know about him, and he replies that he is creeped out by bald guys that have hair plugs because they remind him of a chia pet. Penny remarks that she loves the way Wooton's pupils jiggle when he stares into her eyes, and they begin giggling as she compares his pupils to Jell-O.