The Revenge of Bigfoot

From AIOWiki
Jump to navigation Jump to search
#915: “The Revenge of Bigfoot” 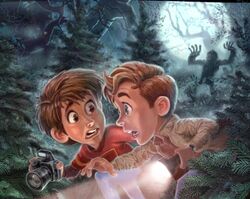 You need to enable JavaScript to vote.
Hurricane Perkins
The Revenge of Bigfoot
Voice of Freedom, Part 1

During a spooky troop campout at Trickle Lake, Jay and Buddy run into a snorting, snarling man-beast.

1. Did the unmasking of Professor Harding surprise you? If not, what clues helped you solve the mystery of Bigfoot?

2. Read Job 12:7-10 and Romans 1:20. Camping out can be a great way to see God's invisible qualities. What masterpieces of nature have caused you to stop and consider the One who created them?

3. Buddy's dad talked about the father-son bonding they enjoy while hiking and reading about subjects that interest them. What fun things do you like to do together? Talk about a special memory, and schedule a time to share one of those activities again soon.

5. When has someone hurt or offended you? Did you consider trying to get even? What happened? Read 1 Peter 2:23 and Luke 6:27-28 for a godly alternative to revenge.

6. Discuss how Buddy and Prof. Harding each reacted when caught red-handed. When have you made things worse by refusing to confess your sin? Find wisdom in Psalm 32:5 and Proverbs 28:13.

7. Why do you think Buddy was able to ignore Jay's teasing when he was the target, but decided to take revenge when Jay mocked his dad? Who do you feel protective of, and why?

8. Why did the Apostle Paul warn, "Have nothing to do with irreverent, silly myths" in 1 Timothy 4:7? Where do you think ghost stories and legends about mysterious monsters come from?