From AIOWiki
Jump to navigation Jump to search
#912: “The Clown Hero” 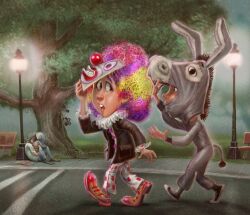 You need to enable JavaScript to vote.
Kopfkino: A Hare, a Hedgehog, and a Doof
The Clown Hero
Search for a Sunflower

A kind gesture creates a media circus when a reporter makes it his mission to unmask the Good Samaritan.

1. Talk about the most memorable birthday party (or costume party) you've ever attended. What made it special?

2. Why was it so important to Eva that Diane's parents chaperone the party? Can you recall a time when you thought your own parents were being unfair to require adult supervision?

3. How does Matthew 25:37-40 apply to Olivia sacrificing her coat? What might you have done in that situation?

4. Is homelessness a big problem where you live? What do you think is the best way to help people on the street and give them what they really need?

5. Read Jesus' words in Matthew 5:15-16 and 6:1-4. Both are equally true, yet may appear to contradict each other. Examine these verses more closely, including the role of our attitude when performing good deeds.

6. What does it mean to "humble brag"? Can you give an example? What did Valerie say that proved she wasn't heroic?

7. Eva told Olivia that we can't control other people's bad actions, but should control our own (Galatians 5:22-23). Can you think of a situation where a bad response to bad behavior made things worse?

8. On the flip side, when have you seen generosity inspire copycat kindness, like it did at the end of "The Clown Hero"? Are you willing to accept the challenge of Hebrews 10:24?

9. In your opinion, which was the most important theme in this episode: obeying parents, giving to the needy, or resisting the urge to draw attention to our good deeds? Why did that one stand out to you?