Kopfkino: A Hare, a Hedgehog, and a Doof

From AIOWiki
Jump to navigation Jump to search
#911: “Kopfkino: A Hare, a Hedgehog, and a Doof” 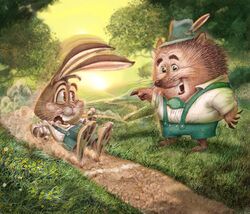 You need to enable JavaScript to vote.
If I Never Told You
Kopfkino: A Hare, a Hedgehog, and a Doof
The Clown Hero

Wilhelm Holstein shares fables involving a race across a meadow and an odd boy finding his way in the world.

1. Pick one word to describe each of the three characters featured in the title of this month's Adventure. If you could spend a day as one of them, which would you choose?

2. Who did you root for in the race between the hare and the hedgehog? Why?

3. Both animals had flaws. What were they? [The hare was arrogant and insulting (Proverbs 16:18), while the hedgehog made a foolish bet and solved his problem with deceit (Psalm 34:12-14).] When has a movie or TV show asked you to root for a less-than-heroic character simply because he or she wasn't as bad as the villain? How should a true hero act?

4. We all have flaws that God wants to help us overcome. Can you think of a hero in the Bible whose sin had serious consequences? How did that person find redemption?

5. At first it seemed that the humbled hare had learned his lesson. Not for long. What landed him on a hunter's plate as "fast food"? Read Romans 12:9 and Leviticus 19:18.

6. James 1:19 says we should be quick to listen. To whom did Doof listen, and how did that help him on his journey?

7. How did Doof's kindness keep him safe from the hungry dogs? Do you know someone with a need that, if you met it, might make them easier to get along with?

8. Doof's dad thought he knew what sort of education his son needed. God had a different plan. How is 1 Corinthians 1:26-29 reflected in Doof's story?

9. Do you think God is more interested in your ability or your availability? Talk about a time when God used you, even though you felt unqualified for the job.