The Case of the Secret Room, Part 1

24"No one can serve two masters. Either he will hate the one and love the other, or he will be devoted to the one and despise the other. You cannot serve both God and Money.
1 Timothy 6:10
10For the love of money is a root of all kinds of evil. Some people, eager for money, have wandered from the faith and pierced themselves with many griefs.
Songs Included
[[{{{song}}}]]
Inventions Used
Instant Freezer
Featured Charity
[[{{{charity}}}]]
Short Used
[[{{{short}}}]]
Spanish Name
El cuarto secreto, parte 1
Spanish Airdate
June 14, 2014
Soundtrack length
{{{soundtrack}}}
Previous title
“{{{name2}}}”
Host
Chris Anthony
Written by
Paul McCusker
Directed by
Paul McCusker
Produced by
Bob Luttrell
Steve Harris
Executive Producer
Chuck Bolte
Post-Production by
Bob Luttrell
Production Assistant
[[{{{production_assistant}}}]]
Engineered by
Bob Luttrell
Music by
John Campbell
Songs by
Unknown
Purchase episode

“The Case of the Secret Room, Part 1” is episode #39 of the Adventures in Odyssey audio series. It was written and directed by Paul McCusker, and originally aired on August 13, 1988.

Whit and Jami Martin solve a forty-year old mystery after finding a skeleton in a hidden room in the basement. 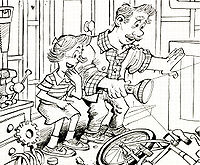 Whit is in his basement working on an "automatic freezing machine" when Tom Riley and his great-niece, Jami Martin, come to visit. Whit shows the invention to Tom and Jami and accidentally drops an important part. It rolls under a large cabinet. Tom and Whit move the cabinet to recover the part and discover an ancient, hidden door. When they wrench open the door, they find a small room. Sitting in the middle of the room is a fully-clothed skeleton with a bullet hole in its shirt. They immediately call the police, and an inspector named Ralph Howards answers a few questions for them.

The skeleton is Spencer Barfield, a man who came to Odyssey in 1946. He worked as a maintenance man at Whit's End when it was known as the Fillmore Recreation Center. He disappeared the day after the Odyssey Bank was robbed of $25,000. The police assumed Barfield was in on the robbery and searched all over the country but never found him — until now. Howards says that Barfield had a partner who double-crossed him, shot him, then ran off with the money.

Whit wants the police to look for Barfield's killer, but Inspector Howards says they wouldn't even know where to start looking. As far as he's concerned, the case will just have to remain a mystery.

But that's not good enough for Whit, so he and Jami head to the library to dig up some clues. They read the microfilm of newspaper articles dating from the approximate time of the robbery. From those, Whit and Jami learn that the bank was managed by Percival Fenwick. Percival now lives as a semi-recluse in his family's mansion on Chatwick Hill.

Whit and Jami also discover another interesting bit of news from the microfilm: A rookie policeman was making his rounds at the bank when the robbery occurred. The man was knocked unconscious by the robbers. His name? Ralph Howards.

Whit and Jami go talk to Percival Fenwick. He's a strange old man with an extensive collection of African weaponry (spears, shields, blow darts, etc.). Fenwick says the robbers cut the alarm and slipped in through a back window. Only he, the bank president, and the police knew where the alarm box was located. Fenwick thinks somebody on the police force tipped the robbers off in exchange for a share of the money.

As Whit and Jami leave, more puzzled than ever, Whit finds a typed note on his car windshield that says "Leave Well Enough Alone", which confuses them further! They go talk to Inspector Howards again. They reveal what they learned about him in the newspapers and tell Howards what Mr. Fenwick said. Howards says he wasn't knocked out — he blacked out. He adds that the police commission cleared him of any wrongdoing in the matter. The whole incident has been an embarrassment — he just wants to put it all behind him. Howards tells Whit to stop pursuing the case.

That night, Whit goes back to Whit's End, where Connie tells him a strange woman came by that afternoon asking all sorts of questions about the basement room and the skeleton. She left Whit an envelope. Inside is a headline dated June 7, 1946: "Police in Car Chase." More mystery!

Suddenly, they hear a crash in the basement. Whit goes down to investigate, and the lights go out. A harsh voice whispers for Whit to stay out of things. Then Whit is pushed into a stack of boxes and is knocked unconscious!

John Whittaker: Everybody should have a library card.

John Whittaker: Well, I guess he's not home.
Jami Martin: But somebody is!