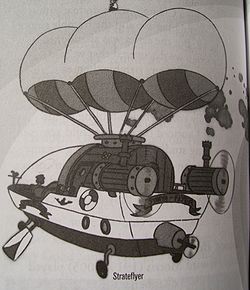 The Strata-Flyer is a flying boat invented by John Whittaker in the Adventures in Odyssey video series.

As described in the episode #440: “I Slap Floor”, the Strata-Flyer is "a flying machine made out of a boat with oars and big helium balloons".

As with many inventions of Whit's, the Strata-Flyer seemed to just "appear" in the video series.

The Strata-Flyer is an invention that is never mentioned in the audio series, besides a tongue-in cheek reference in #440: “I Slap Floor”. In the episode, Bernard Walton tells Mandy and David Straussberg a series of strange stories that supposedly happened during the previous week. Bernard doesn't refer to the Strata-flyer by name, but instead recounts Whit giving a description of his "new invention" as proof that he was not acting strangely, when he clearly had been giving bad advice.

According to "Whit," his new invention is:

When Connie Kendall and Tom Riley view this explanation as further proof that Whit is behaving strangely and needs to rest, Whit replies that they will

which is a reference to the use of the Strata-flyer to save Dylan in A Fine Feathered Frenzy.

The Strata-Flyer is equipped so far with: