If I Never Told You

From AIOWiki
Jump to navigation Jump to search
#910: “If I Never Told You” 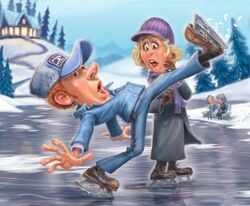 You need to enable JavaScript to vote.
Let’s Call the Whole Thing Off
If I Never Told You
Kopfkino: A Hare, a Hedgehog, and a Doof

Not everyone is excited when a surprise guest shows up for the Bassett-Wise holiday retreat at Trickle Lake.

1. Talk about your most memorable Christmas ever. What made it so special?

2. Penny likes to plan surprises. Do you enjoy it when people surprise you? Or would you rather know about the surprise in advance so you can look forward to what's coming?

3. What happened to cause tension between Trissy and Eleanor? In your opinion, which of the sisters had more reason to feel hurt and upset? Why?

4. Who do you think paid the highest price for Eleanor's years of bitterness toward her sister? How do the Apostle Paul's instructions in Ephesians 4:26-27 and 31-32 apply to this situation?

5. Why is it important to talk about hurt feelings instead of bottling them up or running away from them? Is anything bothering you that would be helpful to talk about?

6. Read Proverbs 15:1. Which harsh words between Trissy and Eleanor seemed to make things worse, and what could the ladies have said or done instead to calm things down?

7. Penny chimed in, "I have an idea! Why don't we sing Christmas carols and not fight?" Read Matthew 5:9 and discuss ways God has used people you know—maybe even you—to keep the peace?

9. Before Trissy was a Christian, she thought of church as an "antiquated tradition." What do you think she meant? How would you explain the difference between going to church and having a personal relationship with Jesus?