From AIOWiki
Jump to navigation Jump to search
#934: “A Dickensian Dilemma” 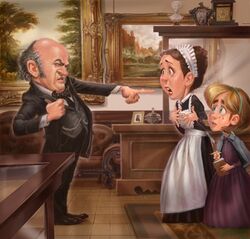 You need to enable JavaScript to vote.
As Buck Would Have It, Part 3
A Dickensian Dilemma
In for a Penny

Emily tests out Renee's new Imagination Station mystery and finds herself on a case in Victorian London.

1. Were you surprised when the truth came out? What did you think had happened to the necklace?

2. If this had been your journey in the Imagination Station, how would you have resolved the case?

3. If you were asked to base your decision entirely on Isaiah 1:17 and Hosea 14:3, what would be Molly's fate?

4. However, Leviticus 19:15 says that godly justice doesn't favor anyone, including the poor. Is there a way Emily could show mercy to Nell and Molly without hurting anyone else or ignoring the law?

5. The Bible should always be our guide. Yet when we represent someone else (a boss, a company, the military, a school, the government, etc.) we're expected to follow their rules as well. How can that lead to moral and ethical dilemmas? Can you think of any examples, maybe even from your own experience?

6. Do you think Emily did the right thing by sending Molly to the orphanage when Marley ordered her out of his house? What other options did she have?

7. How did you feel about Jacob Marley when we first met him? Would you have wanted to help him solve his case? Read 1 Peter 3:9, Proverbs 12:16 and 15:1, and 2 Timothy 2:24. Then talk about God's instructions for dealing with difficult people.

8. Do you think it was fair to confiscate the necklace from Mr. Twaddles, who purchased it in good faith from Bill Sykes? Why or why not?

9. Sykes is a really bad guy by all measures—including Proverbs 6:16-19 and 1 John 3:4. Is that enough to justify convicting him for Molly's mistake?

10. What has this Adventure taught you about working through situations where there are no easy answers? Take comfort in the promise of James 1:5. Are you facing a tricky situation right now? Pray together for God's wisdom.