The Martyr and the Rooster

From AIOWiki
Jump to navigation Jump to search
#895: “The Martyr and the Rooster” 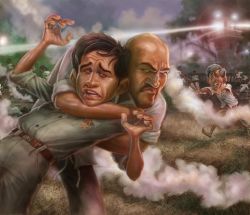 You need to enable JavaScript to vote.
A Simple Reminder
The Martyr and the Rooster
The Forever Gift

A man arrested for his faith makes it his mission to keep the peace and share Christ in a Burmese prison.

When Cooper Calhoun’s buddies find him carrying a Bible, he brushes it off, afraid to let on that he’s a Christian. It leads to a conversation with Pastor Wilson Knox, who tells him about a similar event that occurred during an uprising at San Wing prison camp.