From AIOWiki
Jump to navigation Jump to search
#867: “Take Every Thought Captive” 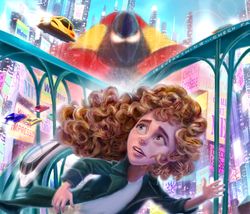 You need to enable JavaScript to vote.
Rumpelstiltskin: A Wee Little Tale
Take Every Thought Captive
All for the Guest

The adventure starts out with Valerie Swanson talking to all her FaceBase followers. Valerie wants her to cyber-bully a girl named Cora for a petty vendetta. Her followers do, Cora is upset, and Valerie gets in trouble with her parents. Her parents decide that Mr. Whittaker should decide Valerie's punishment. Mr. Wittaker decides that Valerie should have a room of consequence adventure to the inside of her mind. Valerie (of course) objects, but after hearing that she would otherwise be grounded for six weeks, reluctantly agrees.