The Sword of the Spirit 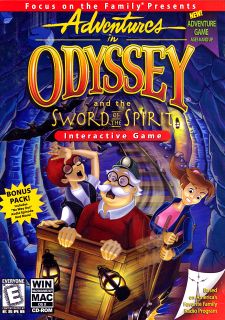 In 1881, Peter McAlister discovered an ancient battle sword in a European castle and brought it back to his home town of Odyssey. When his children were older, he created a "Gauntlet of Virtues" to test their character and lead them to the secret treasure.

But the night before Peter presented his gift, he died. The McAlister children were never told about the gauntlet so the secret location of the Sword of the Spirit remained an unsolved mystery, until now.

Embark on a mysterious adventure playing the role of Whit, Connie and Eugene in a chase through abandoned mine-shafts and secret passageways in search of the Sword of the Spirit. However, before you uncover the secret hiding place of the sword you must first pass the Gauntlet of Virtues - nine tests of character such as honesty, kindness and love.

It's a fast paced flight through dark tunnels, where every passage holds another key to the Sword's real power, and where virtue itself is in the balance.