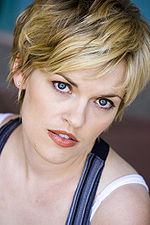 Kari Wahlgren originally appeared on Adventures in Odyssey as Gloria McCoy in #37: “Camp What-A-Nut, Part 1”. 22 years later she reappeared on the show as the Parker family's nanny Maria, in #676: “An Agreeable Nanny”. She is also a stage and film actress in addition to her voiceover work, and is well-known to anime fans for roles in the English dubbed versions of series like FLCL (Fooly Cooly), Wolf's Rain, and Witch Hunter Robin, as well as playing "Mindy, from the Network" in the best selling 2009 animated film, Bolt.