From AIOWiki
Jump to navigation Jump to search
Janet Waldo 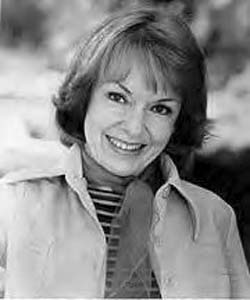 On radio, Waldo lent her voice to many programs, including One Man's Family, yet she left a lasting impression as teenager Corliss Archer in Meet Corliss Archer even though Shirley Temple starred in the film adaptations, Kiss and Tell and A Kiss for Corliss.

In animation, she was most notable for providing the voice of Judy Jetson in all versions of the Hanna-Barbera television cartoon The Jetsons, except the movie version where the role was played by Tiffany. Waldo was the last surviving main cast member of The Jetsons series.

She also provided voices for Nancy in "Shazzan", Josie in Josie and the Pussycats, Penelope Pitstop in Wacky Races and its spinoff series, prior to her death in 2016, she was the surviving cast members of The Perils of Penelope Pitstop series because her co-stars from that series have passed away: Mel Blanc, Paul Winchell, Don Messick, Gary Owens and Paul Lynde. A teenage babysitter named Jeannie from Tom and Jerry in the two episodes, Busy Buddies and Tot Watchers, the witch, Sersi in Thundarr the Barbarian in the episode Island of the Body Snatchers and many other animated female characters. She did the voices of Morticia Addams in the short-lived 1973 cartoon series adaptation of The Addams Family. She also provided the voice of Princess in Battle of the Planets.

Waldo played ingenue roles in a handful of 1940s films, often in small, unbilled roles although she was the leading lady in three Westerns, two of them starring Tim Holt. Waldo made a rare television acting appearance when she appeared on an episode of I Love Lucy with Richard Crenna, as Peggy, a young girl smitten with Ricky Ricardo. She made an appearance on an episode of The Andy Griffith Show as Amanda. She later was the female lead opposite Anthony Franciosa in the short-lived sitcom "Valentine's Day" in 1964.

Waldo, a relative of Ralph Waldo Emerson, was married to playwright Robert Edwin Lee from 1948 until his death in 1994; they had two children.

Click one of the above tabs to see what Janet Waldo has done on Adventures in Odyssey.
Janet Waldo has acted in 40 episodes with an average rating of 92.3%