From AIOWiki
Jump to navigation Jump to search
Gracie Williams 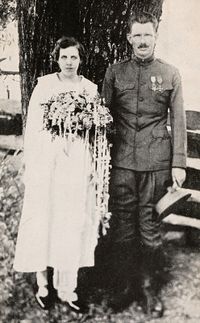 Alvin York described her as "a feisty gal". She was a Godly woman who wouldn't consider dating Alvin unless he gave his life to Jesus. She was also a pacifist who believed any kind of war was wrong but supported Alvin's decision to go to war.

Gracie was Alvin York's love interest. Initially, she was hostile towards him because of his sinful ways and actions when they first met along with Everett Delk. She was even willing to hit Alvin with a rock for clipping his younger brother Robert York. At Everett's funeral, she walked up with Alvin to the alter after Pastor Pyle's fire and brimstone sermon. Once Alvin became a Christian, she was open to being courted by Alvin and accepted dead animals from him for food.

When he went off to war and proposed to her immediately before, she promised to wait for him to come home. She was initially shocked that Alvin was no longer convinced fighting was not an option but accepted that he needed to think about the matter. After the war, she became Alvin's wife.

She married Alvin York after he returned from World War I. Her mother-in-law was Mrs. York and her brother-in-law was Robert York. She also has nine other siblings in law and mentions her own family.