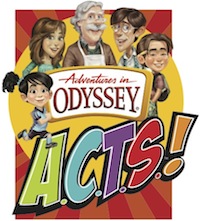 The A.C.T.S.! Contest was launched on May 1, 2013 on the Official Podcast with the help of Brock Eastman, Jesse Florea, and Bob Smithouser. A.C.T.S.! stands for A Call to Serve.

· The first part of the contest was a challenge to serve your family, your community, and your world for at least 12 hours this summer.

· The second part of the contest was to send in a 2-minute video telling how you served.

· The top 100 videos received a year's subscription to the new Odyssey Adventure Club, which officially launched in January 2014, and Album 57.

· The 1st place winners, one boy and one girl, received a mission trip to Costa Rica and the privilege to be the first ever Official Adventures in Odyssey Ambassador. They were also featured on the Official Podcast and Clubhouse Magazine.

The winners of the A.C.T.S. contest are Marissa Allebach and Wesley Combs.

The Acronym "ACTS" was also loosely used for Album 57: A Call to Something More

The A.C.T.S. theme song, named "Live It Out Loud" was written by the band VOTA.