From AIOWiki
(Redirected from 056)
Jump to navigation Jump to search
#56: “By Faith, Noah”

“By Faith, Noah” is episode #56 of the Adventures in Odyssey audio series. It was written and directed by Paul McCusker, and originally aired on January 7, 1989.

Whit tells Jack and Lucy the story of Noah's Ark. 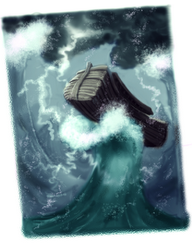 In an effort to illustrate the meaning of faith, Whit tells Jack Davis and Lucy Cunningham-Schultz a comical version of Noah's Ark.

Noah reveals to his wife that God is going to destroy the earth by flood. According to Noah, the Lord also told him to build a gigantic boat called an "ark." In the ark, he, his family, and two of every kind of animal on earth will be saved. Noah works on the ark for the next 120 years, proceeding by faith. He puts up with obstacles such as jeering neighbors, city health inspectors, the president of the Arkbuilders Union, an attorney representing the Pre-Antediluvian Civil Liberties Association, and a member of the Society for the Protection of Cruel Animals, among others.

Finally the ark is built, and the flood comes. Noah, his family, and the animals are safe, but Noah still must trust that the Lord will take care of them and eventually return them to dry land. He sends out the raven and the doves, and eventually his faith is rewarded. God commissions Noah and his family to go out of the ark and be fruitful and multiply, then sets a rainbow in the sky as a sign that He will never again destroy the earth by flood. Whit's point about faith is made.

VERSION DIFFERENCE: [view] In the broadcast version of this episode, Chris goes to a bookstore to find a book with the meaning of faith. After a rather long (and funny) discussion with the clerk about the kinds of books they have, she introduces the episode.

Noah: Honey, I'm home.
Mrs. Noah: Hello, dear. How was your day?
Noah: Not bad. I worked on our vineyards in the northwest corner, planted a new field of crops, and talked to God. What's for dinner?

Noah: Well, He told me about his plan to destroy all of mankind and all the animals. Where's today's paper? I want to see who won the game.

Noah: Just imagine, Darling, I get to be a shipbuilder, sailor, and zoo keeper! Hehe!
Mrs. Noah: Ay, you're only 480 years old, what’s a new career?

Noah: Listen folks! I want you to get out of my yard before I call the police!
Police Officer: I am the police. Do you realize your ark over there is double parked?

Noah: Japheth!
Japheth: I know, I know. The dove. Are you sure you don't want to try the raven again?
Noah: No, no. We'll stick with the dove, thank you. Uh, would you...
Japheth: The window. I got it.
Noah: Lord, if there is any dry ground out there, please let the dove find it. Amen. Alright my little dove, well, you know the routine! <dove flies off> Maybe I should try the parakeet.