In a Sun-Scorched Land, Part 1

From AIOWiki
Jump to navigation Jump to search
#862: “In a Sun-Scorched Land, Part 1” 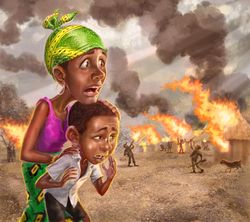 Matthew learns about a young boy forced to flee his home after rebel soldiers raided his African village.

It's the day of the Odyssey robotics fair. Matthew Parker is excited to show the judges his automated breakfast baking robot. Unfortunately for Matthew, the demonstration goes completely wrong. After the robot breaks and makes a complete mess of the breakfast, one of the judges sends Matthew to the kitchen for some cleaning supplies.

In the kitchen, he slips on the newly mopped floor and hits his head into a wall. Joseph Calhoun, who had just mopped the floor, asks Matthew if he's okay. Matthew confesses he has had a rough day. Matthew tells Mr. Calhoun about the disaster that had just occurred. He opens up about how he wanted to win the competition, not for himself, but for his grandma who was recently diagnosed with cancer. Matthew wanted to make his grandma proud for what could possibly be the last competition she would be around for. After consoling Matthew, Mr. Calhoun offers to clean up the mess and tell Matthew a story of when he was hopeless, too.

The story begins in Eastern Africa, when young Joseph Calhoun, his mother, and his sister, Palita are walking home from church to their tiny village. Palita runs ahead into the village, with Joseph and his mother trailing behind. Joseph is thinking about the sermon the pastor gave at church. His mother tells him Jesus loves them, but Joseph says he does not believe it.

Suddenly, young Joseph and his mother hear shots coming from the village. Quickly, they realize that their village is under attack by a rebel army. Joseph's mother orders him to run away while she tries to find Palita in the village. Joseph tries to hide, but a man finds him. He introduces himself as Mhalid, a man who has taken in over thirty boys who escaped raids, such as the one in Joseph's village. He offers to help Joseph find his family after the attack is over.

Joseph and Mhalid arrive at their safe camp. Mhalid tells Joseph that many boys he has helped have banded together to fight back against the raids of the enemy, calling themselves the United Army.

While getting food, Joseph meets a boy named Omer. Omer recently lost his entire village and everything in it. While getting roasted goat, Joseph is startled when he recognizes a one-eared goat, much like the goat his family had. Joseph is suspicious.

It is nighttime and everyone but Joseph and Omer is sleeping. Joseph voices his concerns about why Mhalid and his men would have a goat from his village. Omer agrees that they should talk to Mhalid; he will tell them the truth.

As Omer and Joseph wander around, they overhear Mhalid and a soldier speaking. Mhalid confesses to the soldier that his plan is to use all of the boys to fight in an army. The army turns out to be the one who landed the attacks on the villages, but none of the boys know it. The soldier leaves to count all of the boys in the hut. Mhalid reminds him that there should be thirty-five boys.

Panicking, Joseph and Omer try to plan a quick escape. The soldier returns to the scene, shouting to Mhalid that he only counted thirty-three boys in the hut. Joseph and Omer run as fast as they can to escape, with Mhalid and his soldier right behind them. Omer and Joseph climb over a fence and run for one day and one night, with Mhalid's truck following them. The boys never stopped running. Eventually, the boys lost the soldiers. Omer and Joseph realize that they have been running in the wrong direction of their respective villages.

Omer makes an altar out of rocks as a reminder of how God provides. Joseph is confused. He does not understand why Omer believes God provided for them after losing their homes and after the dangerous escape from the enemy soldiers. Omer says that God rescued them from their enemies, just like He did the Israelites. "We escaped because we got over that fence and we ran. We helped each other!" Joseph says. Omer explains, "But God was with us." Omer says they will travel through the wilderness until they find the Promised Land, similar to how the Israelites did. Omer says they should follow on the side of a nearby path.

The boys have not eaten in days. They are starving. Through the trees, they see a camp. They see the rebel symbol, like the one at Mhalid's camp. Out of desperation, Omer and Joseph sneak by the camp to look for food. They go inside a shed, looking around for anything they might need. They hear voices outside the door. Someone is trying to get into the shed!